From the Goetheanum newsletter 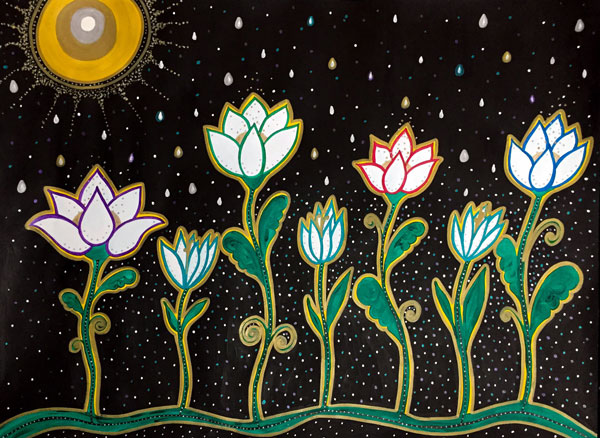 The Goetheanum is affected by the current health regulations. In a series of articles, members of the Goetheanum Leadership give expression to their views of the present situation. Here, Philipp Reubke asks about the human soul in the midst of today’s crises.

“Il y avait un jardin, qu’on appelait la Terre …”[1] When Georges Moustaki performed this song in 1971, he touched the hearts of the youth of that time. For the children growing up surrounded by steel, concrete and asphalt, Moustaki sang about a virginal planet Earth that provided wonderful sense impressions throughout the seasons and that had all but disappeared:

The study The Limits to Growth met with lively interest when it was published in 1972 by the Massachusetts Institute of Technology on behalf of the Club of Rome. To this day more than 30 million copies have been sold, in 30 languages.[3] A book published in 1975 by a German politician, entitled ‘A planet is being looted’, remained on the list of bestsellers for weeks.[4]

These songs, studies, books have been having an impact for fifty years. Nutrition, agriculture, architecture, energy, waste management, traffic – in most areas of life and technology, many people have adopted new habits which, in the early 1970s, were derided by others. What can we do to stop or to counteract this frantic exploitation? The situation has hardly changed. The IPCC report of August 2021 reads more worryingly than any previous ones: climate change is happening faster and is more momentous.”[5]

We’ve got used to it …
Amongst the chorus of answers and initiatives one also hears voices which claim that the climate can only really be protected by limiting the freedom of the individual. The situation was so dramatic, they say, that people needed to be forced to behave in ways that are less damaging to the environment.[6] In order to achieve what is good and reasonable for all, individual freedom needs to be curtailed. Ideas arising spontaneously from one’s head and heart can be dangerous. A social credit system – the attempt to control people by giving ‘points’ for desirable behaviour and withholding them for undesirable behaviour – is not only used in China but welcomed by most Americans.[7]

Currently, we see a similar approach in relation to health questions. The Green Pass (which proves that the holder has either had Covid, been vaccinated or tested negative) indirectly introduces compulsory vaccination, if people are forced to pay for their tests. Those who sacrifice their individual freedom in favour of what is seen as being in the best interest of all are seen as morally laudable. This did not start with Covid-19, however. Looking back on the first two decades of a century that began with 9/11, the French lawyer François Sureau wrote as early as September 2019, “We have got used to living without freedom. It is not new that freedom is a thorn in the flesh of the rulers. What is new is that the citizens accept this out of fear.”[8]

Some accept this authoritative approach because it promises to conquer evil, crime, illness and death. Why does it not sit well with others? Because they feel that, along with the freedom, any sense of responsibility, inner development and culture will also disappear.

Looking at education
Young children learn to stand up, walk, speak, think, discover the world – but not by being ordered or forbidden to do things, by targeted training and explanations. Children don’t learn out of obedience but because they want to learn. They will do all these things out of love for the people around them. Emmi Pikler was quite radical in pointing out what happens when we always assist children. “It is essential that children can discover as much of the world as possible by themselves. If we assist them with all these tasks, we deprive them precisely of what is most important for their intellectual development.”[9] The musician and educator Heinrich Jacoby was convinced that “Rules, unsuitable questions and hasty assistance hinder child development. Children lose the ability and courage to try out things for themselves, to improvise and express themselves spontaneously.”[10]

Rudolf Steiner thought that “Children instinctively react against conscious attempts at exerting influence on them, particularly in the first two and a half years.”[11] He even thought that educating with rules at this age was not only soul-destroying but even had a detrimental effect on the body. “If we start much too early with getting children to stand up or walk, we ruin their nervous processes for life.”[12]

It seems obvious with young children: if we constantly steer them like puppets, their strength of will, love for the world and joy in learning and developing will wither away. Waldorf Education has always aimed to develop strength and sensitivity in children by stimulating them to be active in their thinking, feeling and will. Activity and learning must not be motivated by either reward or punishment, but by joy and interest. [13] This continuous stimulation towards an active life of soul aims to help children and young people to find their own interests in life and to act responsibly in society of their own accord.

It doesn’t seem so serious when adults are being led like puppets to do the right thing – either subtly through manipulation, more obviously through punishment and reward, or tyrannically by being forbidden their own ideas or practical alternatives. It is, after all, in the interest of health and survival. The question that is controversial is whether these measures actually serve a good purpose. But would it not be more to the point to ask whether adults are not in a similar danger to children: will their soul and spirit not wither away if they are kept in leading-strings and forced to do what seems good and sensible? If they are no longer given the possibility to recognize for themselves and support what is good?

Individualized ethics
Are not free initiative, joy in experimenting and ‘learning through error’ conditions for a living culture and science? Is the possibility to choose the wrong option not prerequisite to moral progress? Rudolf Steiner was quite emphatic in saying that “it is moral progress when we no longer simply accept the commands of an outer or inner authority as the motive of our actions, but strive to understand the reason why some maxim or other should motivate our actions.”[14] The ethical individualism he advocated throughout his life entails that we learn not to be guided by either personal preferences or normative regulations. “Actions are therefore neither stereotyped, merely following some rule, nor are they performed automatically, in response to an outer impact. They are simply determined by their own ideal content.”[15]

Then social responsibility no longer needs to be the opposite of individual freedom. Choosing freely to be responsible for others enhances my development. Just as the young child’s self-motivation is destroyed by guided learning, the adult’s own will to develop is destroyed by generalized ethical precepts. Rudolf Steiner asks us to “Act so that the principles of your actions may be valid for all people. […] This principle means death to any individually motivated actions.”[16]

Is this not why the environmental crisis has continued to grow, even after 50 years of non-interference with individual freedom, why we don’t trust each other to resolve the health crisis with means other than massive restrictions of freedom? The “individual motives” have become all but ineffective: only few people continue to believe that they may be holding the seed for healing the earthly and social organisms.

What would Georges Moustaki, who died in 2013, sing today? Would he dedicate his song to people growing up in an environment governed by prohibition, punishment and supervision?

There once was a garden called human soul,
wherein wonderful feelings, thoughts and impulses grew freely.
Where is this garden wherein the free spirit could have been born,
where is the heart with doors wide open to all beings and all dimensions,
I am looking for it but cannot find it yet!

Creativity and innovation – challenge your thinking! Compassion and Forgiveness
Scroll to top