Bulletin
You are here: Home1 / Bulletin2 / Bulletin3 / Articles of Interest4 / So Your Kids Are Stressed Out About the Climate Crisis – Here’s h... 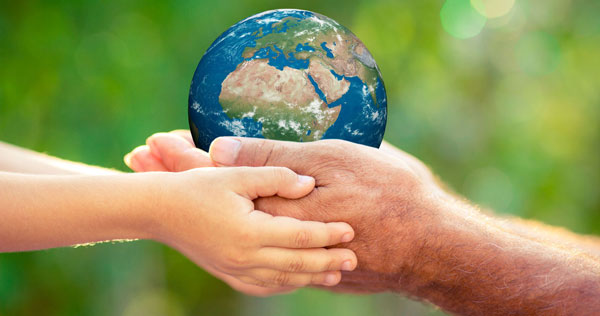 When my nephew, Sam, was four years old, he said to his mother one night before bed, “Mom, I don’t want to be alive anymore.”

His mother pulled him onto her lap and asked, “Why?”

“The animals are all going to die, and I don’t want to be here when everything’s dead,” he answered. Mind you, this scene played out in 2005, long before the world watched as 1 billion animals died in Australia’s bushfires.

I’ve been thinking about this incident a lot lately as I read media reports about children suffering from eco-anxiety. For their whole lives, our kids have absorbed terrifying stories about what’s happening to our planet and the creatures that inhabit it. Worse, more and more of them understand that when it comes to doing what it takes to avoid future hell-on-Earth scenarios, adults are, on the whole, failing them. No wonder so many of them, from preschoolers to college students, are freaking out. How might we help our kids deal with their feelings in ways that are age-appropriate, empowering—and honest?

I started pondering this question long ago when my own children, now 20 and 23, began showing signs of anxiety about the climate crisis. The following suggestions grew from my observations of what helped them, what helped other families I’ve interviewed, and what professionals have to say about a problem that’s not going away any time soon

“First, it’s important to validate the young person’s experience and emotions,” says Dr. Patricia H. Hasbach, a psychotherapist who specializes in Eco-therapy. “Find out what it is they’re worried about.” Some, like Sam, may grieve the generalized—and very real—extinctions happening worldwide. Others fear their own demise in hurricanes, floods, or wildfires. One 12-year-old survivor of California’s 2018 fires panics now every time the Santa Ana winds kick up. My own kids describe an “always there, back-of-the-mind type fear of the future.”

In Sam’s case, his mother didn’t dismiss his worries. After her son’s stark pronouncement, she told him, “Wow, that’s a big feeling. Tell me more.” Then she stated other things that are also true, like, “The earth is strong. Lots of people are working to protect animals, and we can help them.”

“OK,” he said. Then he rolled over, fell asleep, and didn’t raise the issue again.

In climate discussions with children, parents are tasked with balancing age-appropriateness with honesty. My husband and I didn’t offer climate tutorials to our preschoolers, but we did talk about protecting the earth and animals, and we showed them what that looks like: rescuing worms from puddles, composting food waste, and advocating for environmental protections.

As our kids matured and encountered more information, often frightening and overwhelming, we listened and—after acknowledging bad news and processing their feelings—reminded our kids of the bigger story, just as Sam’s mom had done: “Yes, it’s a time of peril. It’s also a time of incredible energy and innovation.” We assured them that apocalypse isn’t inevitable and that scientists say we have the time and the technology to avert catastrophe.

“There’s so much bad and overwhelming odds all the time that it’s hard not to just get defeated,” says Sam, who is now 19 and an environmental studies major and activist. “But if you look at it another way, we have an opportunity to influence the outcome of humanity and civilization, and be righteous warriors in the fight of our lives.”

This may be the most helpful truth to share, if kids don’t already know it: Youths worldwide are using their moral authority to demand bolder climate action from leaders. Adults are starting to listen, and that’s helping alleviate some anxiety. Greta Thunberg’s father recently told BBC News that his daughter, who suffered severe climate anxiety and depression before beginning her climate strikes, has become “very happy” because of her activism.

Dr. Hasbach also asks parents to consider whether a child’s anxiety may stem from disconnection from nature. “Young people spend an average of four to seven minutes a day in unstructured outdoor play, and nine hours in front of a screen. That’s a problem.”

Getting an anxious child of any age outside to garden, skip stones, or play in the park may reduce anxiety of any kind. Nature immersion, says Hasbach, also helps kids love nature “before they have to do the hard work of trying to save it.” They need a “deep, sincere connection to that part of themselves, recognizing that they are the natural world.”

Dr. Hasbach says that it’s important for parents to help children feel a sense of agency in the climate crisis, but that few parents actually do this.

“Remind children, ‘Here’s what some people are doing to help address it. Here’s what we’re doing in our family and why. Here’s what else needs to be addressed.’” Then, brainstorm together. What sounds fun or interesting? An easy first step might be a family challenge to reduce food waste by 20 percent. Or, students could do school research projects about the kind of energy their local utility uses, and who gets to make that decision.

Families could explore what’s happening locally with forest restoration or fossil fuel resistance, and decide how to support those efforts. Our family helped launch a youth climate action club at our kids’ high school, with parents providing logistical support and pizza.

And of course, the 2020 election cycle offers everyone a chance to make big changes at the highest levels of our government. Families can research candidates together: Who supports a Green New Deal? Who supports fracking? Teens can volunteer at candidates’ offices or join Get Out the Vote campaigns.

“Help teens get involved in social activism,” Dr. Hasbach says. “Doing research, letter-writing campaigns, protests, or clean-ups in group settings is particularly impactful, because the peer group is primary at that age.”

Sam, who volunteered on a 2018 congressional campaign and recently joined the Sunrise Movement, agrees. “It’s really exciting, working with all of these young people doing all these amazing things. It’s really high energy because the stakes are so high.”

Be a Role Model

But Serena Orsinger, an 18-year-old climate leader in my community with whom I spoke last year, warns that adults shouldn’t leave young people holding the bag, climate-wise.

“If we’re not seeing the urgency and, quite honestly, the fear from the older generations that we’re feeling, that can be upsetting, because it’s such a big weight to carry. And if it’s not spread throughout the generations, it can be discouraging. But when we’re all bearing the load that is climate change, it’s more empowering and doesn’t feel like as big a burden.”

In his BBC interview, Greta Thunberg’s father reported that Thunberg got “energy” when her parents, at her urging, changed their own behavior.

It’s important to recognize that some lifestyle changes might mean more to your kids than others. As Sam puts it, “When I say ‘change your life,’ I mean ‘think about giving up some—or a lot—of your time. If you have the financial stability, maybe work a couple of days less a week and volunteer for a congressional campaign, or some activist group like Sunrise or 350.org.”

He recently asked his mom to trade one work day for activism. “She said ‘that’s a lot to ask,’ and I said, ‘This problem demands a lot. Think about my children and what kind of life they’ll have.’ That really resonated with her. She said she’s going to try to get more involved politically now, and my dad is thinking of early retirement so he can too.”

When I asked how he felt hearing that from his parents, he said, “I feel better whenever I see people actually weighing the facts about what we’re up against and making conscious decisions to do more.”

Then he grinned. “It’s inspiring.”

From the Sierra Club, click for links to resources on this topic.

An inspirational speech What can parents do to help their child’s teacher? A ‘recovering’...
Scroll to top