Digital play versus free play: Mott expert addresses the differences and the potential impact on child development at American Academy of Pediatrics session. By Beata Mostafavi

Blocks, books and bikes used to be the staples of childhood.

But as more kids grow up with a seemingly endless menu of virtual activities offered through digital media, child development experts worry about the wane of traditional playtime.

One pediatrician at the University of Michigan’s C.S. Mott Children’s Hospital, who is addressing the topic at the national American Academy of Pediatrics meeting in New Orleans, has even coined the phenomenon “gamified childhood”.

“But mobile devices are becoming an almost unavoidable part of children’s worlds. We hope to demystify the design differences between technology and classic toys and help parents increase open-ended play experiences for their children.”

Radesky says there are some benefits in “shared” technology experiences, such as watching a movie together as a family and discussing it or looking up new recipes to cook together. But children are increasingly on devices alone as parents see them as tools to pacify tantrums, keep children occupied during mealtime and even as a way to take a break from parenting.

“Early childhood is a vulnerable time for exhausted parents, and they may find relief in technology,” Radesky says.

“But both children and parents need experiences with play that provide a sense of self-efficacy and living in the moment.”

Radesky highlights four key differences between the classic and tech-supported types of play and why parents and pediatricians should take notice.

Child’s Autonomy: In digital games, the app designer is in control, Radesky says. Many apps and games are simple, cause-and-effect puzzles or races with a design that constrains a child’s behavior. They have a “closed loop” design that decides for children what they are going to do next, rather than letting the child’s brain take the lead. “The designs behind much of children’s digital technology does not support the autonomy, self-realization, and parent-child interaction that traditional play allows,” Radesky says.

Another part of autonomy is learning self-control. However, many parents are using mobile devices to keep children seated at the dinner table, calm on brief car rides or to settle them to bed. These habits may inhibit their ability to learn how to self-regulate emotions and be counter-productive when it comes to good sleep.

Unstructured play, on the other hand, puts the child in control. “Child autonomy and control is at the core of unstructured play. The child thinks up what to do, how to do it, and what to do when things don’t work out,” Radesky says. “This is where imagination really allows a child to push past old ideas and create new ones, handle strong feelings, and figure things out for themselves.”

Hooking Kids in Different Ways: While digital games are attention-grabbing, unstructured play is attention-building, Radesky says. In some apps and games, “there are so many over-the-top interactive enhancements” that children mainly pay attention to these exciting features, rather than understanding the concept the app was trying to teach. But it can be difficult to screen for appropriate apps. Radesky’s research analyzing apps and games marketed to young children found that most of them came with a misleading ‘educational’ label that they may not deserve.

“The natural and social worlds are rarely going to be as attention-grabbing and ‘shiny’ as online games and apps are artificially designed to be,” Radesky says. “But this allows the child to determine what they want to direct their attention towards, and to think clearly without artificial distractions.”

External versus internal rewards: Apps and games provide many external rewards, such as tokens, candies, virtual toys, or piggy banks every time children get an answer correct. This is intentional because designers know that young children are driven by rewards, Radesky notes. What can be problematic is that “children may get over-focused on consuming and collecting.”

She points to examples, such as balloons, fireworks and parades that “reward” a child for completing a simple task in a digital game. This type of digital design, known as “persuasive design” is a strategy used to maximally engage a user.

“We need to help parents understand this tricky type of design and how inappropriate it is for children and teens who are so susceptible to social feedback,” Radesky says. “We don’t want children to see play as just collecting and hoarding virtual things.”

The rewards of traditional play, however, are internal and social. “When children struggle with a new challenge and figure out a solution, the reward can be subtle, with a sense of satisfaction and self-efficacy,” Radesky says. “Providing children with praise for hard work is appropriate, but it shouldn’t be over the top. Otherwise children can get used to always needing external validation.”

Solitary play versus social play: Most apps and games are designed in a way that assumes there will be only one user, and children tend to use tablets and smartphones with a body posture that can nudge out social interaction with others, Radesky says.

“In our study comparing play with traditional toys to play with tablets, there wasn’t really that space for parents,” Radesky says. “Children created their own solitary space and cocoon around the tablet. It was rare for a child to look up and say ‘look at this!’ Parents feel this difference in play, so it’s important to help them know it’s not their fault, it’s an intentional design feature of the tablet.”

“Parents are familiar with playing with toys and books because they probably grew up with them. They probably get their moments of strongest connection and feeling effective with their children when they are playing with well-designed toys. As pediatricians, we can help parents carve out spaces for the traditional play that feels good to them too.” 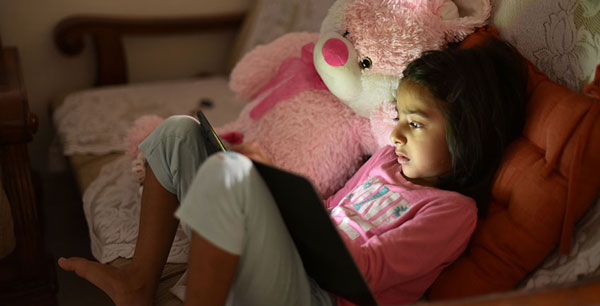