The year 7 girls who play for the Thunderbirds won their second Grand Final in a row on Monday night completing a fabulous season in the junior league. It was a nail biting game as they were evenly matched by the Black Queens who played a strong game. All of the girls gave it their all and at the final siren the score was even. The match went into 5 mins overtime to determine the winner and the girls came out firing to win the match 32 to 25. They were presented with the competition shield which will now proudly display 2 wins to the Thunderbirds. The coaches encouragement award was presented to Ruby Stante while the referees Most Valuable Player (MVP) Award was presented to Brianna Hart. Coaches Lindy and Kasper were very proud of the girls for their consistent effort, improvement, great team work and awesome sportsmanship. The team are looking forward to the new challenge next season going up to the big league- High School Comp. Good Luck to all! 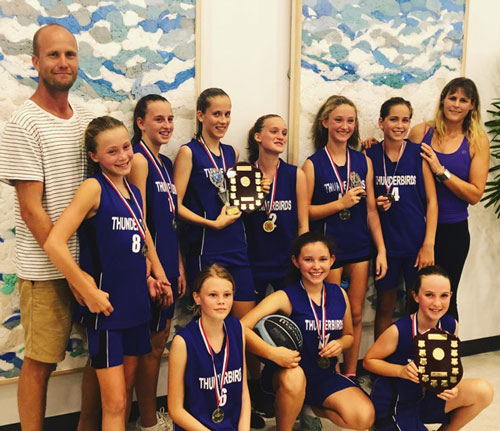