You are here: Home / Our Community / Articles of Interest

Christmas is all about the journey, and here’s some daily rituals and activities to help bring wonder, patience and joy into your family home during the festive season.

Even if you’re not ‘into’ Christmas, it’s very difficult to avoid the busy energy and consumeristic onslaught that unfortunately dominates the Western culture in the lead up to December 25th. I think it was my own massive aversion to this unsavoury aspect of the season that inspired me to research and create wholesome ways to bring Christmas to my own children.

Children LOVE Christmas, and it just didn’t feel right to me as Mother to deprive my boys (or myself) of the wonder and joy and beautiful messages that can be found within the Christmas stories from around the world.

By consciously celebrating the lead up to Christmas in a meaningful way, I find it helps immensely in grounding and connecting our family at a time when packed schedules and neverending to-do lists can otherwise scatter all of our energies!

Read the full article by clicking this link 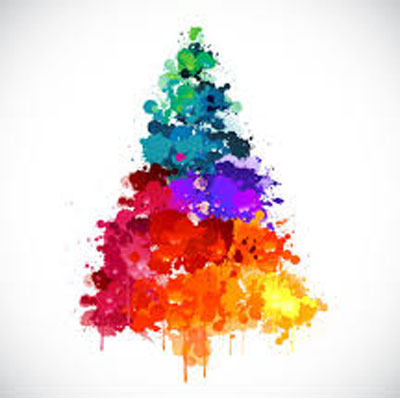 Where do you find Christmas in your family?
Is it hidden within the pages of your favourite story book?
Maybe it’s wrapped up in a gift made especially for someone you love?
Or perhaps, it can be found amongst the delicious smells of a Christmas feast?
Well, this is the story of a little boy who went on his own search for Christmas….and you’ll
never guess what he found!

Joey had looked everywhere, but still had found no signs of Christmas.

They were staying on his Grandparents farm, way out west for the whole month until after Christmas – and while Joey usually loved the tractor rides and farm adventures – this time he couldn’t help but think about all the ‘Christmassy’ things he was missing out on back home.

First, there was the Christmas Market & the end of year school Concert.

Then, there was the Santa sleighs and giant candy canes and bright lights up and down his street, not to mention the fake snow and happy carols playing in all shops.

But out here on the farm there was no shiny tinsel or red hats to be seen and he was starting to worry that maybe Christmas just wasn’t going to happen at all?!

And he also missed Dad.

Dad was coming to meet Mum and Joey and his little sister May at the farm on Christmas Eve and it felt like such a long time away.

When they chatted on the phone one night Joey whispered his concerns about Christmas and Dad reassured him, “Don’t worry mate, you’ll find Christmas out there – you just need to know where to look.”

But so far, he hadn’t found anything.

So, before bed that night Joey asked Lil-Ma & Jo-Pa in a very serious voice, “Do you know where to find Christmas on your farm?”

His grandparents looked at each other with mischievous smiles before Jo-Pa turned to Joey and replied with a wink, “I think we might have a few ideas.” 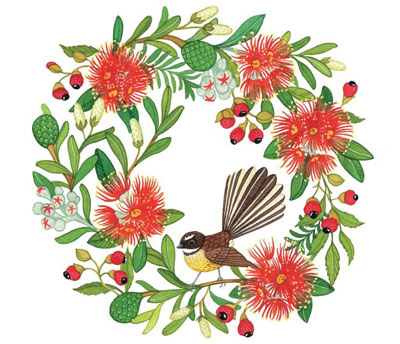 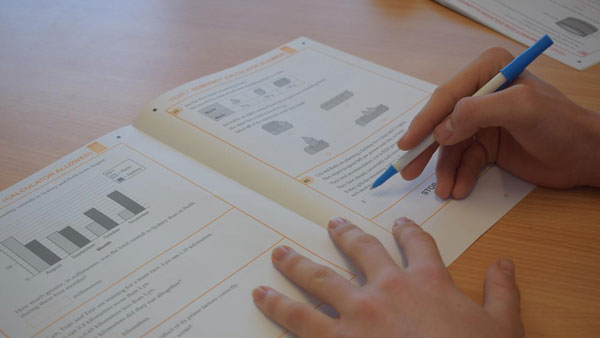 THESE are the Northern Rivers schools that consistently top the state’s NAPLAN results.

An independent analysis of five years of NAPLAN results has revealed the schools that performed the best in the Year 5 and Year 9 tests between 2014 and 2018.

Over that five-year period, Bexhill Public School, in Bexhill, had higher Year 5 yearly results than any other school in the state, scoring an average of 2740.2 each year.

The top performing Year 9 school was Cape Byron Rudolf Steiner School, in Byron Bay, where the average yearly result was 3010.0 for the five years.

To find how each school performed between 2014 and 2018, their average scores for each year were combined and the yearly average found.

Special schools, schools with fewer than 20 students enrolled in either year, and schools that did not report any results for NAPLAN subjects in either year were excluded from the analysis.

The figures were independently compiled from the Federal Government’s MySchool website.

That revealed Emmanuel Anglican College, in Ballina, had the second highest results for Year 5s over that period, with a yearly average of 2652.6.

The second-best performing Year 9 results were at Emmanuel Anglican College, in Ballina, where yearly results were 3000.6.

Shearwater the Mullumbimby Steiner School, in Mullumbimby, had the third highest average results between 2014 and 2018 with averages of 2982.8.

Read the full article from the Northern Star here

Advent starts this year on Sunday the 1st of December and is celebrated for the four Sundays leading up to Christmas until Sunday the 22nd of December. Advent is frequently celebrated by people of every religious background, every faith, every spiritual path as part of the festivals of the cycle of the year.

Traditionally Steiner schools and families celebrate Advent by looking each week at the natural kingdoms on Earth: minerals the first week, plants the second week, animals the third week and humans the fourth week (see verses below).

Advent Garden – assembled and added to each Sunday of Advent with the four kingdoms celebrated each week try adding tiny crushed shells (collected from the beach) in a spiral pattern for the spiral on which Mary and Joseph figures walk.

Advent Crib – a nativity scene of the four kingdoms, adding a different one each of the Sundays- Crystal Kingdom, plant kingdom, animal and human kingdoms. 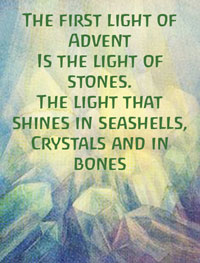 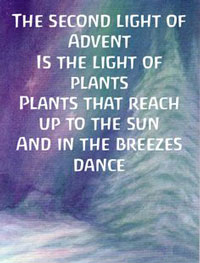 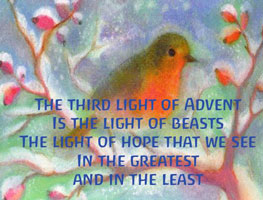 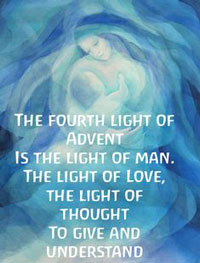 Additional Reading:
Our library has some Advent handouts available.
Possible stories include The Star Money from the Brothers Grimm, (and if you have the book “Rose Windows”, there is a lovely idea for a window transparency in there); craft ideas in The Children’s Year and Families, Festivals and Food. Other stories include the ones from “The Light In the Lantern: Stories for Advent” from Wynstones Press; Advent Sunday Stories, Collette Leenman; Mary’s Little Donkey, Gunhild Sehlin; Advent and Christmas Stories, Estelle Bryer and Janni Nicol.

Some lovely stories for Advent and Hanukkah by Eugene Schwartz available by following this link. 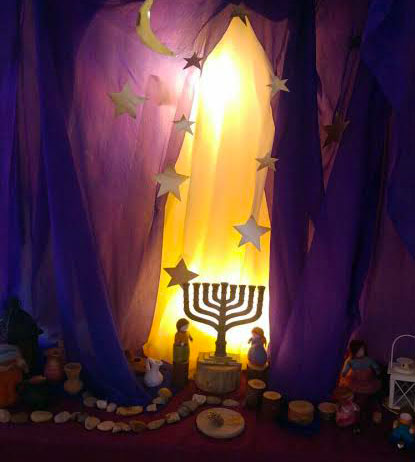