The Class 3 Camp was at Hosanna Farm Stay.
There were lots of animals at Hosanna. There were cows, chickens, a horse, guinea pigs, rabbits, wild boars, a dogs, goats, and we saw two goats being born.

I slept in a very comfortable cabin with four girls and I did a fun activity which was a treasure hunt. The second best activity was holding two twelve hour old goats and milk a cow, and we got to feed a calf and the chickens and guinea pigs.

We went on a walk to see the glow worms. We walked up 14 steps then after half an hour (we walked very fast) we suddenly stopped and kids said there was a wild dog sleeping in the middle of the train tracks. I thought it was true because we had to turn off our lights but it was only the cave, and the cave was full of glow worms.

My highlight was seeing two baby goats being born, they started as a big browny red whiteish bubble, then they popped. The second baby tried to stand up when its legs were still inside the mum’s tummy. It looked like Jesus was getting born because all the other animals gathered around. 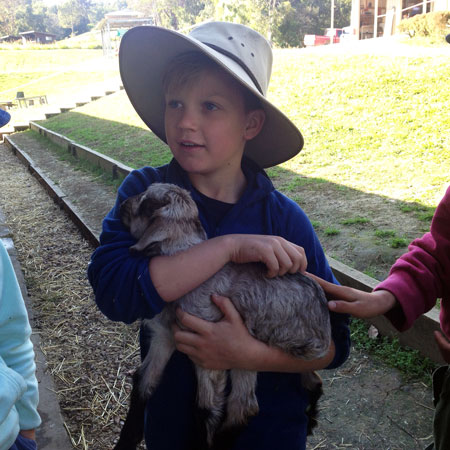