Mid year, Sharon Shostak approached me to source some original music for the film she was working on (details below).
She provided us with some key emotive words to work with to create instrumental music for the film.
We rehearsed some ideas, Matt Gulliford set up a recording environment and they went for it! Sharon conducted them at times, it was a great experience for us all.
Thank you to Sharon for the opportunity, the music was used for the film and we are very excited to see it. Thank you to Matt for making it all possible.

About the Film
The Mullumbimby area and Byron Shire in the 70s-80s was a seeding ground for the birth of a multitude of alternative practices and ideals that have taken root throughout society today, via the phenomenal convergence of a new settlement by the so-called hippies.

This second documentary in the culture series, and third film commissioned by the Brunswick Valley Historical Society, documents the birth and development of environmental and social awareness, that pushed those early new settlers to achieve world-first successes in important environment protections that are now taken for granted.

Part two – Activism and Politics features those seminal battles: the spraying of poisons, the Federal dam proposal, the lobbying for the right to share land, the Terania blockade, the birth of alternative publications, the marijuana raids that became a civil rights issue, and how the alternative ethos slowly took over Council, are all amazing stories told by those who were there, and delivered in Sharon Shostak’s usual informative and entertaining style, rich with rare archival photos and film. 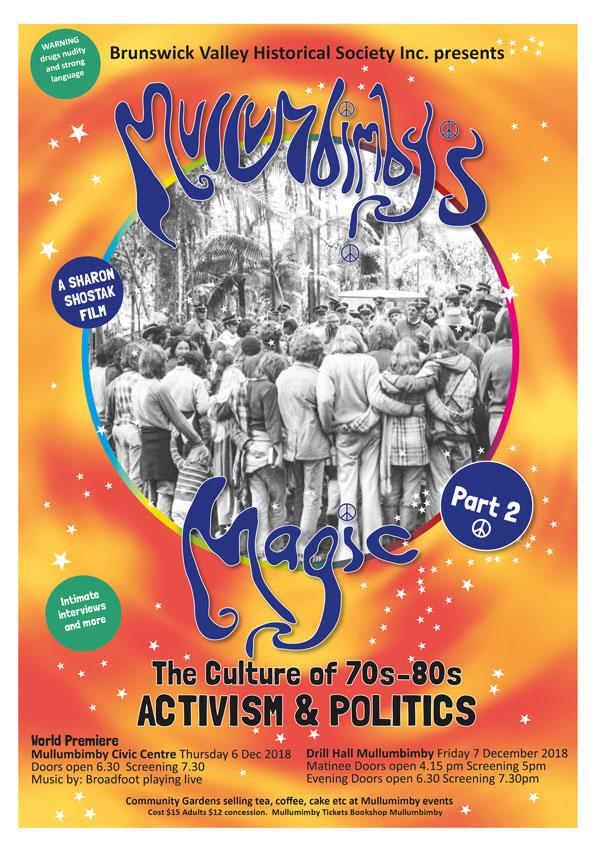